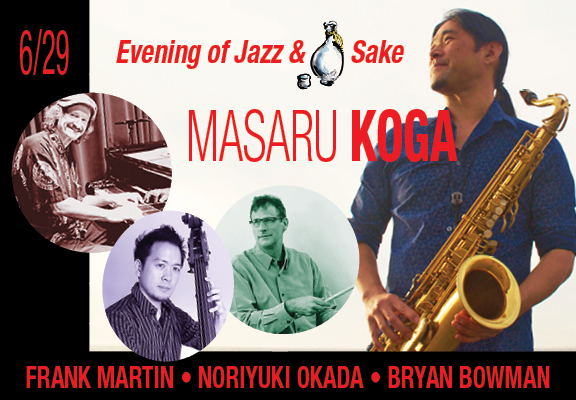 Saxophonist and Flutist Masaru Koga returns to Takara Sake Tasting Room with a stellar ensemble for a one-night only engagement featuring his original genre-bending music, in a unique blend of Jazz, Afro-Latin, Japanese, Avant Garde, and more!

MASARU KOGA
San Francisco based multi-instrumentalist Masaru Koga developed his worldview at an early age. Soon after his birth in Chiba Japan, his family relocated to the US due to his father’s work, and spent this adolescent years moving around multiple times. By the time he graduated high school, he had lived in three different countries and nine different cities.

With an international background, it was fitting that he would find himself years later at San Jose State University to pursue music by enrolling in their Improvised Music Studies program, where he intensively studied and explored musical tradition from around the world. With guidance from his mentors including Dwight Cannon, Dr. Hafez Modirzadeh, Dr. royal hartigan, Dan Sabanovich, Baomi Butts, and Joe Hodge, Koga earned his BA in IMS in 1995.

Fueled with a passion for cross-cultural experience, Koga started to incorporate the Japanese shakuhachi into his music, and began his apprenticeship with master shakuhachi artist Masayuki Koga. In addition to woodwinds, Koga also fell in love with the sound of Brazilian Samba drumming and spent many years in community based samba schools and studied with master drummers such as Jorge Alabe, Carlinhos Pandeiro de Ouro, and Jimmy Biala. From 2006 to 2011 he served as the director for SambAsia San Francisco, an award winning Samba group originally founded by Jimmy Biala.

Koga has worked with artists such as Akira Tana, Anthony Brown, Mark Izu, Fred Ho, Wayne Wallace, Kenny Endo, and Kat Parra, as well as his mentors Hafez Modirzadeh and royal hartigan. In addition to performing, he is an experienced educator. Aside from his regular private instruction, he has taught at California Jazz Conservatory, and also conducted workshops domestically and internationally.

In 2010, he received “The Latin Jazz Corner Best of 2010 Awards” in the “Latin Jazz Flautist of the Year” category for his performance on Kat Parra’s album “Dos Amantes”. In 2013 he worked as a musical director for a three-week off-Broadway run of Fred Ho’s critically acclaimed theater work “Deadly She-Wolf Assassin At Armageddon!” in New York City, in which he conducted and performed as the leader of the Afro-Asian Music Ensemble

His recent work includes the annual concert tour to Japan with Otonowa (www.otonowa-usa.com) led by drummer Akira Tana, in which they give concerts and music workshops for the communities recovering from the 2011 Tohoku earthquake and tsunami.

His first album as a leader “Flower Fire” was released in 2018.

Frank Martin is an educator at both UC Berkeley and at the California Jazz Conservatory in Berkeley, California. He is in demand as a clinician both in the United States, having taught at the Naropa Institute in Boulder Colorado, Stanford Jazz Workshops at Stanford University, as well as in Europe at the acclaimed SAMI Institute in Sweden.

His 2015 debut release Like Minds was well received by critics and DJ's alike and was named in two “Best of 2015” lists, reaching #1 on WHFC’s Top 15 of 2015, Desert Island Picks, and called a “noteworthy local jazz release” in KQED’s Top Ten Bay Area Jazz Releases of 2015. The CD received nationwide radio play and was in extensive rotation on KCSM 91 upon release.

Bryan has played with many great musicians in the Bay Area. He toured the US with RCA artists Behan/Johnson and has traveled throughout Canada, the Caribbean and Mexico.
In January of 2013 he performed at the historic SFJAZZ Grand Opening with Mary Stallings, Eric Reed and Matt Penman. The week long event featured McCoy Tyner, Chick Corea, Bill Frisell and many others.

NORIYUKI KEN OKADA
Bassist Noriyuki "Ken" Okada was born in New York and raised in Brazil before moving to Japan when he was 9 years old. Reflecting the fact that he grew up in multiple different cultures, Ken enjoys playing in various styles, from jazz to samba to fusion. After winning the largest national college big band jazz competition in Japan, he started playing professionally in Tokyo. After moving to the Bay Area in 2002, he has been playing in jazz clubs and has appeared in festivals such as Monterey Jazz Festival, Stanford Jazz Festival, SJZ Summer Fest and SFJAZZ.