An Evening of Music and Sake 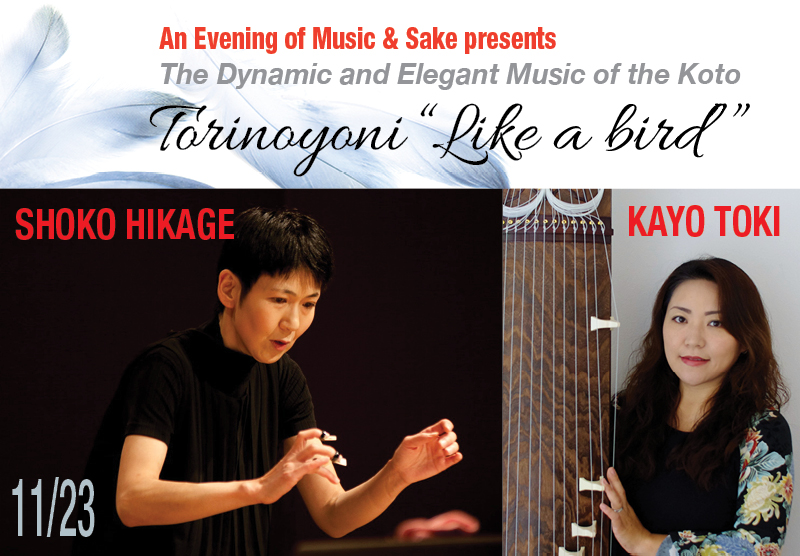 The dynamic and elegant music of the Koto.
Torinoyoni "Like a Bird"

Tadao Sawai (1937-1997) is one of the most respected koto masters in the modern Japanese music world. Torino Yoni (Like a Bird) is Sawai’s best-known work for koto, and it demonstrates his talent for creating enchanting melodies which draw on the koto’s unique characteristics. Sawai’s music combines a wide range of modern and traditional playing techniques.

Two great interpreters of Sawai’s music, SHOKO HIKAGE (Sawai Koto) and KAYO TOKI (Seiha Hogakukai) will present a program that highlights their virtuosity and the soaring beauty of the Koto. The concert will be held in the elegant space of Takara Sake Tasting Room!

The koto, similar to the Chinese gu-zheng, is a 13-string plucked zither, which was introduced to Japan from China through the Korean Peninsula in the 7th-century. It was at the about the same time that Buddhism and many other cultural influences arrived in Japan from the continent. It is thought that there was also a koto- like zither which already existed in Japan, evidenced in a small, clay figurine dating from the Yayoi period (3rd-century B.C. to 3rd-century A.D.).

Tadao Sawai (1937-1997) Recognized as the greatest composer/performer for the koto of the late twentieth century, Sawai had the keenest musical sense and most natural talent for bringing his instrument to life. Tadao Sawai began playing koto at the age of 10 and graduated from Tokyo University of Fine Arts in 1959. In 1960 he embarked on a series of recitals through which the sought to develop a new world for the koto. Building on the work of the legendary koto composer Michio Miyagi (1894-1956). Sawai performed extensively both in Japan and around the world. A number of his more than 100 recordings have received awards. He is known for his dynamic playing style, willingness to experiment and improvise, and talent in challenging the limits of modern koto playing. His compositions for the jushichigen (17-string koto) have been particularly important to the development of that instrument, and his wife Kazue Sawai is the leading interpreter of his works for the jushichigen. His expressive, stunning compositions continue to inspire musicians and audiences around the world.

Shoko Hikage began playing koto at the age of three. Her first teacher was Chizuga Kimura of the Ikuta-ryu Sokyoku Seigen Kai in Akita Prefecture, Japan. She received special training from the 2nd and 3rd IEMOTO Seiga Adachi. In 1988, Hikage graduated from Takasaki College with a major in koto music. She was then accepted as a special research student at the Sawai Sokyoku-in under Tadao and Kazue Sawai. In 1992, she moved to Honolulu, Hawaii to teach koto at the Sawai Koto Kai Hawaii and at the University of Hawaii. Hikage premiered Hyo-shin Na’s “Crazy Horse" for Korean Traditional Orchestra and Koto Solo with the National Orchestra of Traditional Instruments in Seoul, Korea in November, 2011.

Kayo Toki started playing koto at age three under Masashino Aihara, and at 12 began studying with grandmaster Masachizu Kawasaki. In 1993, she became a junior acting master (jun shihan) of Seiha Hogakukai and took the stage name Masakazu Toriya. In 2002, she graduated from the NHK Academy of Japanese Traditional Music and became an acting master (shihan)of Seiha Hogakukai. After teaching the koto and the shamisen in Tokyo, she moved in 2006 to San Jose, where she plays in Fujin Raijin and teaches koto as a way to promote the understanding and appreciation of Japanese traditional music. She became a great master (dai shihan ) in 2018.