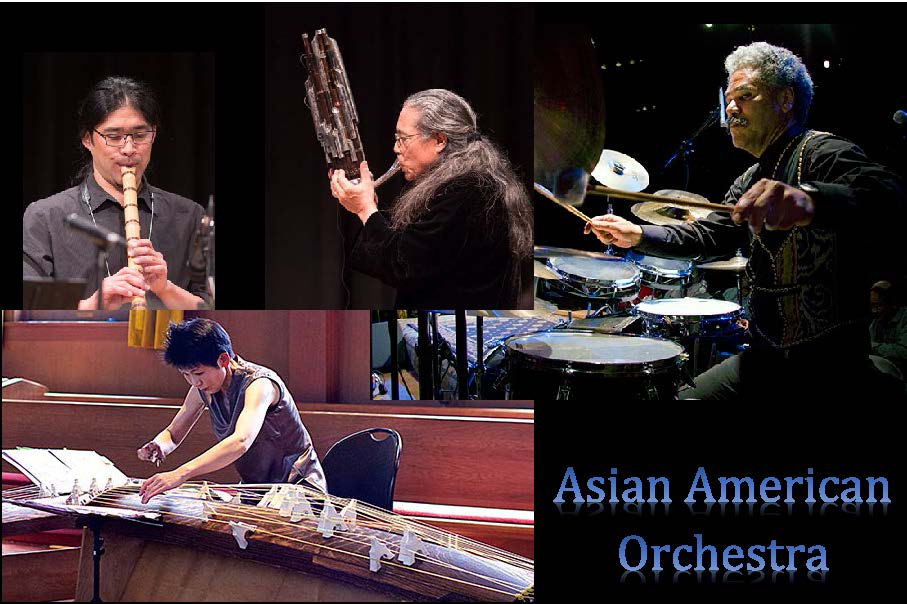 Evening of performance and sake tasting.

Music and Sake...
A Matchless Pairing

“If music is a language, then Berkeley percussionist and composer
Anthony Brown is one of the most articulate men in jazz.”

“And Mr. Brown, swinging away on drums, made the piece levitate.”
NEW YORK TIMES

Composer, percussionist, and ethnomusicologist Anthony Brown has become a seminal figure in California contemporary creative music directing the Asian American Orchestra (AAO). Since 1998, his San Francisco-based Orchestra has received international critical acclaim for their performances and seven recordings blending Asian musical instruments and sensibilities with the sonorities of the jazz orchestra. Their recording of Duke Ellington-Billy Strayhorn's Far East Suite received a 2000 GRAMMY™ nomination for Best Large Jazz Ensemble Performance. The Orchestra’s release, Monk’s Moods: Music of Thelonious Monk with guest Steve Lacy, was rated a “Five-star masterpiece” and “Best CD of 2003” by Downbeat magazine. Anthony Brown’s 2005 recording, Rhapsodies, features his recomposition of Gershwin’s Rhapsody In Blue, which he completed as a 2003 Guggenheim Fellow, and toured nationally with
the AAO.

His most recent commissioned collaboration, DOWN BY THE RIVERSIDE Requiem for a King featuring spoken word by Angela Davis and music by the Asian American Orchestra and Voices Of A Dream Gospel ensemble premiered as the centerpiece event of the 2018 San Francisco International Arts Festival in commemoration of the 50th anniversary of Dr. Martin Luther King’s assassination.

Dr. Brown composed the original scores for the world premieres of American Conservatory Theater’s After The War (2007), TheatreWorks’ The Legacy Codes (2003), and Cross Currents, in collaboration with Dimensions Dance Theater for the 2007 SF International Arts Festival. Brown’s composition, Rhymes (For Children), served as the theme music for Pacific Time, KQED’s Public Radio International (PRI) weekly newsmagazine. In 2008, he composed the music for the award-winning short documentary, Witness to Hiroshima. Dr. Brown and his music are featured in the film documentaries, Don’t Lose Your Soul: The Music of Anthony Brown and Mark Izu (2012) and Doubles: Japan and America's Intercultural Children (1995). He also can be heard on over twenty recordings on Water Baby, Soul Note, Blue Note and Gramavision Records.

Dr. Brown holds an M.A. and Ph.D. in music (ethnomusicology) from UC Berkeley, as well as a Master of Music in Jazz Performance from Rutgers University. A Smithsonian Associate Scholar, Artistic Director of Fifth Stream Music, and an advisory board member of the Oakland Interfaith Gospel Choir, Dr. Brown has served as a Visiting Professor of music at UC Berkeley (1998, 2002) and as Curator of American Musical Culture at the Smithsonian Institution from 1992-96. He has published with Oxford University Press, Simon & Schuster Macmillan, and his book, Give the Drummer Some! The Development of Modern Jazz Drumming, is forthcoming on the University of California Press.   www.fifthstreammusic.org

As the Artistic Director of the Asian American Jazz Festival for 15 years, Izu has gained national and international attention for developing a new musical genre, Asian American Jazz, and has performed with artists such as James Newton, Steve Lacy, Zakir Hussain, Kent Nagano, George Lewis, Cecil Taylor, Anthony Brown and Jon Jang. Recently Izu has been inducted into the Grove Dictionary of Music as a composer and founder of Asian American Jazz.

Izu has composed scores for film, live music concerts and theater. In 2009 Izu won an Emmy® Award for Outstanding Music for his score in Bolinao 52. His film scores include Steven Okazaki’s Academy® award-winning Days of Waiting; Emmy-winning documentary, Return to the Valley; and a new score for the DVD release of Sessue Hayakawa’s 1909 masterpiece, The Dragon Painter (Milestones DVD - 2007). His theater scores have been performed at the Kennedy Center, Lincoln Center, and Sundance Festival and he was awarded a Dramalogue Award for Best Original Music & two Indie Awards for best CD.

Izu’s other awards include Meet the Composer, Gerbode Composer Commission, Asian Business League Artist Award, Rockefeller MAP, National Endowment for the Arts, and San Francisco Arts Commission. Izu was a founding faculty member of Stanford’s Institute of Diversity for the Arts in 2002. In 2007 he received the US/Japan Creative Arts Fellowship to Japan sponsored by the National Endowment for the Arts and the Bunkacho.  http://www.firstvoice.org

Shoko Hikage, koto/bass koto (Japanese zither)
Shoko Hikage began playing koto at the age of three. Her first teacher was Chizuga Kimura of the Ikuta-ryu Sokyoku Seigen Kai in Akita Prefecture, Japan. From 1985, she received special training from the 2nd and 3rd IEMOTO Seiga Adachi. In 1988, Hikage graduated from Takasaki College with a major in koto music. She was then accepted as a special research student at the Sawai Sokyoku In (Sawai Koto Institute) under Tadao and Kazue Sawai, where she received her master’s certificate (kyoshi). Hikage also completed a one-year intensive seminar at the Sawai Sokyoku In. In 1992, she moved to Honolulu, Hawaii to teach koto at the Sawai Koto Kai Hawaii and at the University of Hawaii.

In 1997, she moved to San Francisco where she continues her concert and teaching activities. Hikage premiered Hyo-shin Na's “Crazy Horse" for Korean Traditional Orchestra and Koto Solo with the National Orchestra of Traditional Instruments in Seoul, Korea in November, 2011. In the Bay Area, she also premiered Hyo-shin Na’s " Night Procession of the Hundred Demons", "Koto Music" and "Koto Ninano". In 2014, Hikage gave a solo recital with a program devoted to Hyo-shin Na's music for koto/bass koto at Buam Arts Hall in Seoul, Korea. The second CD of her playing of Na's music was released on the Top Arts Label in February 2015.   www.ShokoHikage.com

Masaru Koga (Sax, Flute, Shakuhachi) has been a member of Anthony Brown’s Asian American Orchestra for over 15 years. His mentors include Hafez Modirzadeh, Royal Hartigan, and Masayuki Koga. He has worked with a variety of artists such as Fred Ho, Kenny Endo, Brenda Wong Aoki, and Wayne Wallace, among others. His recent work includes the release of his first album as a leader “Flower Fire”, as well as the annual tours to Japan with Otonowa, led by jazz drummer Akira Tana, giving concerts and music workshops for communities recovering from the 2011 Tohoku earthquake and tsunami. Visit www.maskoga.com for more info.